The engine in your Mercedes-Benz works with precision to produce smooth and efficient operation. As any car lover knows, the key to this is engine timing.

The engine’s timing is vital, responsible for syncing different parts of your engine and regulating the combustion cycle. If engine timing is off, you may experience a loss of power, reduced fuel efficiency and even complete engine failure.

Central to maintaining this specific timing in your engine, is a timing chain or belt.

The timing chain is a strong chain that loops around the gear wheel in the camshaft and crankshaft to maintain the synchronicity of the valves and pistons respectively.

Engines designed with timing chains instead of the more common timing belt generally enjoy greater durability and strength. Additionally, timing systems that use chains can go much longer without replacement.

While a timing chain may be stronger and more suited to powerful vehicles (such as the ones Mercedes-Benz offers), they aren’t indestructible. Just like any other part in your engine, timing chains may fail and require a Mercedes-Benz service.

Today, we explain the most common causes of timing chain failure in your Mercedes-Benz, how it can be fixed, and most importantly, how calling Ammstar for Mercedes service in Melbourne can prevent it from happening in the first place.

While not all vehicles use timing chains, most Mercedes-Benz vehicles (especially those powered by higher-displacement engines such as the C-Class) do.

In terms of function, there’s no difference – both serve the same purpose of synchronising the camshaft and crankshaft in your engine, preventing engine valve failure.

So if they’re so similar, why does Mercedes-Benz continue to use timing chains when most other car brands have moved on to rubber timing belts?

Timing chains and belts perform hundreds of circuits, even during a short drive. The belt or chain will interact with various tensioners, pulleys as well as the hydraulic gears in both the cam and crankshaft.

This can generate a lot of friction and puts the timing chain or belt under considerable pressure.

A metal timing chain is inherently more durable and more resistant to the heat and friction generated by your engine, especially the powerful ones found in Mercedes-Benz vehicles. It will stand up to these pressures without wearing down like a rubber belt might.

By contrast, rubber belts can warp, or become brittle with the prolonged friction and heat. Timing belts will slowly degrade necessitating periodic replacement – by contrast a timing chain can theoretically go the entire life of your car without replacement.

In fact, timing chain replacement isn’t even included on most Mercedes-Benz service schedules!

It’s because of the aforementioned durability that most official Mercedes-Benz maintenance schedules don’t even mention timing chains. Instead, they assume that the chain will last the lifetime of the car, and exclude it from routine services altogether.

It doesn’t have a date or time at which it needs to be replaced, nor is it part of any service schedule, because it’s assumed that it  won’t ever need to be replaced under normal conditions.

The M271 CGI engine goes even further – instead of having interconnected links, timing chains in these engines use a series of prominent “teeth”, connected by strong side links.

The teeth offer a more aggressive fit with sprockets that turn the camshaft and crankshaft, reducing the chance of the chain coming loose. Furthermore, this also makes the timing chains in these engines even less prone to wear-and-tear. In fact, in many cases timing failures aren’t the result of a problem with the chain itself, but rather the hydraulic camshaft actuating gears.

Of course, that isn’t always how things play out in the real-world (we’ll get to that in due time).

That’s why the Mercedes-Benz specialists at Ammstar don’t strictly follow the maintenance schedule. Instead, we’ll take a look at the condition of your timing chain and offer our expert opinion regarding whether or not it really needs replacing.

Every since around the 1960s, most manufacturers made the switch from timing chains to timing belts.

While the main reason was to save money (rubber belts are considerably cheaper, even with periodic replacement), another reason was noise. Older timing chain systems were noisy, which many motorists weren’t happy with.

Since then, however, new developments mean that modern engines with timing chains are able to bring the volume down to the point where noise is no longer a major consideration in deciding between timing chains and timing belts.

Now that noise isn’t a major factor anymore, it’s no wonder that many manufacturers are starting to go back to timing chains!

Some may also argue that a belt is lighter than a chain and therefore, the engine will be more free flowing resulting in faster acceleration.

Of course, if your timing chain is making noise, it may be a sign that you’re suffering from a potential timing problem. In these cases, we suggest talking to a Mercedes-Benz mechanic to get the problem inspected. 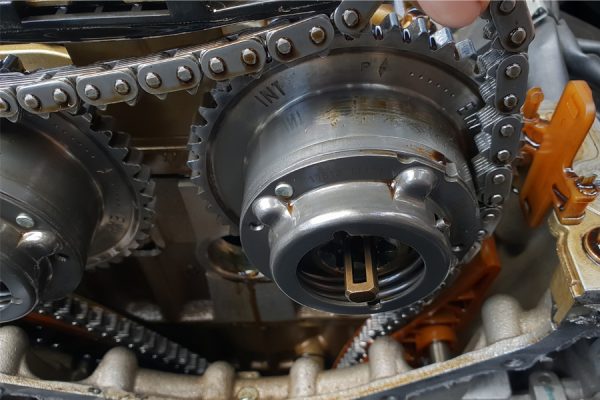 An example of the updated timing chains used in an M271 CGI engine, with the more aggressive toothed design. This example came loose as a result of a tensioner problem, which we were able to fix for the grateful owner!

Timing chain issues can be found in any vehicle – today, we’ll be focusing specifically on vehicles powered by versions of the Mercedes-Benz M271 engine.

That’s just a handful of the vehicles that use this particular engine.

In particular, 271 Kompressor and CGI engines are particularly prone to timing chain failure. Today, we will discuss what causes timing chain problems in both of these engines, as well as the most common timing problems.

M217 Kompressor motors are somewhat infamous for using roller chains that are more prone to stretching.

If you ask us, the term “stretch” is a bit of a misnomer. The links in the chain themselves aren’t stretching – rather, it’s the pins and holes that the links pass through.

As the chain runs around the gears of the camshafts and crankshaft, the movement between the rollers and links ever so slightly wears down the pins and holes that the links pass through. This in turn causes each link to move slightly further apart, elongating the chain and creating slack.

While the amount of “stretch” may be quite small, Mercedes-Benz engines are precisely engineered – even a slight elongation in the timing chain can potentially throw the timing of your Mercedes’ engine off.

This can result in engine timing failure, which in turn may result in piston failure and the associated loss of performance and potential engine damage!

Worn-out teeth in the sprocket of the camshaft actuating gears may result in the timing chain coming loose and “skipping”, as the grooves in the sprocket are ground-down to the point where the chain can no longer maintain a snug fit with the sprocket in your cam or crankshaft any more.

This has the consequence of throwing your engine out of sync which, as we all know, can cause major engine problems.

With the timing now out of sync, valves and pistons would find themselves colliding, in turn causing piston failure and necessitating significant repairs for your Mercedes-Benz.

In the worst-case scenario, this could even result in the chain being bounced around by engine operations, or even coming loose altogether. The now-loose chain can be flung around your engine uncontrollably, doing considerable damage.

Again, this was more of an issue with the M271 Kompressor, and later variants of the M271 remedied this by redesigning the chain and gear systems.

Of course, with the extreme friction these gears undergo, a certain degree of wear is to be expected, even with the new design. During routine Mercedes-Benz service, your specialist mechanic may be able to detect this kind of wear and recommend the removal of the rocker cover for a more thorough inspection.

Designed after the M271 Kompressor, the M271 CGI benefits from knowledge of the chain stretching issues found in Kompressor engines, and uses an updated timing chain and gears set-up to prevent this.

Using more aggressive teeth in the place of rollers, the M271 CGI maintains a tighter fit between the chain and gear sprockets. As a result, Mercedes-Benz was able to minimise instances of a timing chain stretching.

However, engines with this revised timing system can still suffer from timing failure – in the 271 CGI specifically, it’s the chain tensioners that is often a source of timing problems.

Tensioners apply pressure to your timing chain, keeping it nice and tense, therefore helping maintain fit between the timing chain and the camshaft sprocket.

In these cases, the root cause may be in your motor oil.

Chain tensioners in Mercedes-Benz vehicles use oil pressure to maintain tension in timing chains. Specifically, they require the correct grade of oil to pressurise the tensioner – oil that’s too thick or thin can affect tensioners and chain tightness.

Only a Mercedes-Benz specialist knows exactly what type of oil works best for your engine. Many generalist mechanics may simply use whatever oil they have on stock – there’s no guarantee your Mercedes will perform optimally!

As the premier choice for specialist Mercedes service in Melbourne, Ammstar’s Mercedes experts have dealt with many timing-related problems, including complete timing chain failure.

Luckily for you, timing chain problems in Mercedes-Benz vehicles powered by the 217 CGI engine are often foreshadowed by rattling sounds, making it easy to detect timing problems in these motors.

In most cases, this is a problem with the cam advance sprockets, and not the chain itself.

The advance sprockets use oil pressure to alter the camshaft timing under different conditions. Under higher RPM, these sprockets advance the engine timing resulting in more power. When the hydraulic components wear out inside the gears, they don’t always maintain the correct oil pressure. This results in the engine that has a distinctive rattle noise when started.

By contrast, the 271 Kompressor engine doesn’t rattle. In our experience, it often creates a surging at idle, especially at startup. While a surging idle can be caused by many different factors, incorrect timing is a consideration when diagnosing this issue.

As such, the only way to be sure that your Kompressor isn’t suffering from a timing chain failure is regular maintenance – don’t be afraid to ask your Mercedes-Benz specialist mechanic to take a look at the timing chain at your next service.

The timing chain is a major component in your engine, and plays a crucial role in ensuring optimal engine performance and fuel efficiency. A rattling timing chain that is not addressed in a timely fashion can create a whole host of problems.

That’s why you should book a Mercedes service in Melbourne the moment you hear uncharacteristic rattling!

Not only are there are several special tools required to perform the repair, a rattling timing chain often comes with a host of other problems that may need attention, to ensure there isn’t any consequential damage that is yet to occur.

For example, a worn timing chain may have originated from an air intake issue or a seized alternator one way clutch pulley, causing the engine to surge and do further damage.

Without rectifying the root cause of the problem, there is a chance the issue could re-occur!

Only a Mercedes-Benz specialist has the know-how, tooling and relationships with parts suppliers to remedy problems that are this severe.

An alternative to dealership service

Ammstar operates independently of the dealership network, granting us greater flexibility over our service and quotes. The result is a superior price for Mercedes-Benz service in Melbourne!

At the same time, we don’t sacrifice quality, either. Our independent Mercedes-Benz specialists are just that – specialists. We possess extensive hands-on experience with Mercedes’ entire range of vehicles, as well as extensive institutional knowledge.

The result? A dealership-level service for your Mercedes, without the price tag!

Need a Mercedes service in Melbourne? Give us a call today:

Alternatively, follow this link to book online, or ask our specialist Mercedes-Benz mechanics any questions you may have about your Mercedes’ timing system.